We've been back in London for a few months now, rediscovering its tastes and smells. Reading other people's blogs has infected me with a desire to resurrect my own, to chart and share the next chapter of my adventures in the British capital.
There will still be plenty of pigging out, but the arrival of a baby means that now more of it takes place in our kitchen than in restaurants. The baby has further reinforced my love of quick meals, the kind that can be rustled up over a glass of wine once she has gone to sleep and before my stomach implodes from hunger. (I do not cope well with hunger, as my husband will testify. I get very hangry.)
Tonight's dinner was just such a meal -- an easy medley inspired by the plum tomatoes from my vegetable box and the harvest in St Mary's Secret Garden.
I was very excited when, among drab council blocks near the shiny new Hoxton Station I stumbled upon this little oasis of edible plants. The garden was founded a quarter of a century ago and is run by volunteers as a haven for local community. There is even a beehive and a pond full of friendly newts. They sell some of the produce on site, and I was given mini shears to cut my own chard -- my first bit of harvesting since childhood visits to pick-your-own strawberry farms.
Chard is another new discovery for me. Its dark green leaves are reminiscent of spinach, but with a stronger flavour, while its stalks -- deep red or white -- are more akin to beetroot. It's in season for another month, and goes well with egg dishes (like frittatas), as well as in salads. 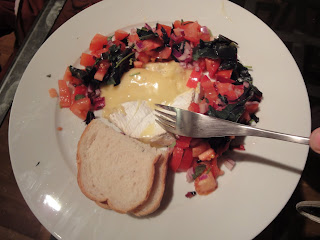 Baked Camembert with Tomato, Onion and Chard Salad
Serves two as a main, four as a starter.

The hot, baked cheese makes it a nice option for golden, autumnal days, when it seems a shame to completely surrender to the impending winter, but it's clear that this year's salad days are numbered.

Chop onions and tomatoes quite finely and place in a salad bowl. If you have time, leave them in the fridge for a couple of hours to soak in each other's juices.
Chop the chard, keeping storks and leave separate. Fry the storks for a couple of minutes, then add the leaves and fry for another minute. Leave to cool (and finish cooking) in the pan. Once cool, add to the tomatoes.
About half an hour before dinner, preheat the oven and pop in the camembert. Leave until its soft to touch on top and runny inside. This took about 20 minutes at 180 degrees in my oven.
Before serving, you could add chopped herbs to the salad (I had some coriander lurking in the fridge). Salad leaves, such as rocket, would also go well.
I don't think this salad requires a dressing, but if you don't like your vegetables naked you could add a bit of olive oil and balsamic vinegar.
Eat dipping chunks of bread into the runny cheese and interspersing with fork -fulls of the salad.
If you don't add salad leaves or herbs, any leftovers will last in the fridge for a day or two. Probably not ideal for work pack lunches though, given the raw onion....