Once upon a time, there was nothing to stop me from just having waffles, or even bread and cheese for dinner.
Now there are two spectres over my shoulder, guilt-tripping me into the kitchen -- the veggie box and the blog.

The veggie box (or rather bag) comes from Hackney's Growing Communities and, for £6 a week, fills my fridge with a selection of vegetables I feel duty bound to use up. The latest batch included some cavolo nero -- a dark green, almost black, leafy Tuscan cabbage. First popularised by the River Cafe cookbooks, it is now widely grown in the UK and can be used in recipes which call for kale or savoy cabbage.

Once I'd ruled out the waffles and determined to use up the greens, my first thought was just to fry them with some bacon and top with an egg. But, while slightly more interesting than grilling a frozen potato-based snack, this still didn't seem sufficiently adventurous to provide blogging fodder. So I leafed through my recipe folder and discovered another way of combining cabbage and bacon -- in a hearty, low-effort soup. 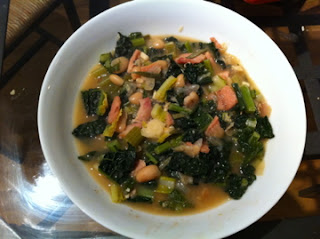 Chop the vegetables and the bacon into fairly small chunks.
Fry the bacon until seared. Add the onions, garlic and celery and fry for about 5 minutes until softened.
Add the rosemary, stock and drained beans. Bring to the boil and cook for about 20 minutes.
Add the cavolo nero and cook for another 5 minutes.

This makes a hearty, warming bowl and has the added bonus of being pretty low on calories. You could grate some parmesan on top to serve, as the original recipe suggested, or like me, you could add a dollop of sour cream. You could also add some black pepper but I would skip the salt, as the stock and the bacon make the soup already quite salty.

Warning: the pale green stems that run through the dark leaves of cavolo nero are very tough. You need to cut them out and just cook the leafy bit. Otherwise, like me, you will end up with some tough and bitter mouthfuls in your otherwise delicious soup.
Posted by EdibleLondon at 6:37 pm