The Barbarians in Moscow

It's been nearly three years since I moved to Moscow and stopped writing this blog. During our time here, the city has finally secured a place for itself on the gastronomic globe, with Varvary - The Barbarians - becoming the first ever Russian restaurant to make it into the world's Top 50 (sneaking in at number 49). 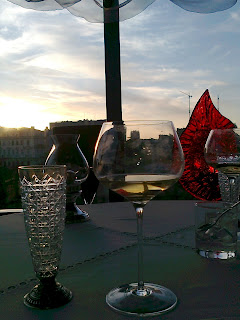 In many ways, the place is very typical of the Moscow dining scene, with over the top decor, a surly doorman and sky-high wine prices. We had booked a place on the balcony, but were told that the tasting menu would only be served indoors, as the strong wind and pukh* outside would ruin the delicate presentation.

Unusually though, Varvary takes pride in using local ingredients. This is a welcome change in a country where distant foreign imports are still the most prized, because local produce is considered to be of poor quality and people want to show that they can afford the best.

The 11 courses of the 8,500 roubles (190 pounds) "Gastronomic Show - Moscow Summer 2011" also had a distinct Russian flavour, showcasing such traditional, unglamorous ingredients as mayonnaise, dill and potato. 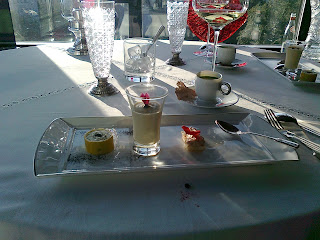 A good example of this was the appetiser, featuring "Real Russian Flavour" in the form of intense beetroot jelly on a sliver of black bread (remnants can be seen on the tablecloth in the photo!). On the same plate there was also sea buckthorn (a bitter, orange berry so beloved by Russians it even features as a toothpaste flavour) with curd cheese, shaped like the Japanese maki rolls that are omnipresent here; cream of broccoli with cod liver, and a herring mouse with sorrel and rocket -- a concoction of intense green, served in a beautiful egg-bottomed cup and possessing of a very sharp fishy flavour. 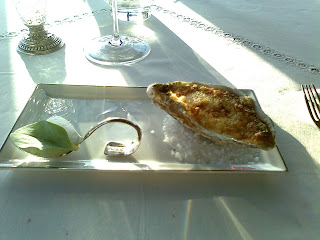 Next came the "oyster", the wittiest dish of the set. The flavour of the creature was separated from the traditional slippery texture and infused into a fragile green leaf, floating on a cloud of lemony foam in a silver spoon. The generously-sized oyster itself, on the other hand, was distinctly unoysterish, served baked under a parmesan crust in a very Russian sauce which the husband identified as warm mayonnaise.

Being a lady (ahem), I was then served the Spring Meadow -- a plate of green salad and fresh asparagus with steaming chunks of white truffle flavoured dry ice around a golden pond of a poached egg.

The manly alternative consisted of a shot of vodka and a plate of intense traditional beetroot soup, borsch, with a ball of dill-speckled sour cream which dramatically burst within moments of serving. Ironically, I preferred the borsch, while the husband was most taken with my salad!

There was generally a lot of soup on the menu -- gaspacho ice cream with lobster bisque was followed by langoustine soup with calmari essence, both nice enough but not spectacular and, together, overdoing the fishy liquid quotient of the meal.

A Russian-style dumpling (varenik) with succulent Kamchatka crab was a hands down favourite, with the quality ingredients shining through. Vareniki, or pelmini as their meat equivalents are known, will be probably the Russian food that I will miss the most, as they are cheap freezer staple for us on those too lazy/tired to cook evenings, though I am more used to them stuffed with non-descript meat than prime seafood.

The fish and meat main courses -- silver cod with peas and beans, and veal on the bone with pepper sauce -- were surprisingly simple, again allowing the quality ingredients to shine through. They were interspersed with potato with dill and red caviar, but alas by this stage the wine had started to kick in, and I can no longer recall how these traditional Russian staples were woven together. Restaurant blogging here seems all but non-exhistent, so google was of no help -- you'll just to have to go and check it out for yourself.

The meal finished off with a selection of honey-based dainties, followed by cute little pots of cream and jam and another potato - this one a chocolate cake-cum-sweet of Soviet childhood.

With a bottle and a half of one of the cheapest wines, the final bill rivalled our lunch in the Fat Duck. In terms of the food and the whole 'show', I would say Hesthon Blumenthal has nothing to worry about yet. But Varvary does offer the most interesting food I have tried in Moscow, while proving that Russian cooking can be turned into a cuisine.

Our time here is running out and London beckons again, so it's too late for me to start a Moscow blog, but I will do a write up of some of my favourite places here - watch this space.

*Pukh is Russia's summer snow. In May and early June, the white fluff blows off poplar trees in Moscow's parks and boulevards, covering the streets and getting into everything from drinks to nostrils. The story goes that after the war, the powers that be wanted to make the city green as quickly as possible, and they chose the poplar as the fastest growing breed in the moderate climate. But in their hurry, they filled the streets with female trees, which produce the fluff (insert sexist joke), ensuring year round snow in the Russian capital.
Posted by EdibleLondon at 3:04 pm

I am an american who has lived in Moscow for the past 18 years. I would have to disagree with two things: a) russian cooking *is* a cuisine and a rather good one b)most knowledgable people actually prefer local ingredients (veggies, poultry, meats, herbs) and most would not consider buying imported meats, butter/curd/smetana and especially fruits and veggies. That's not to say they don't buy imported items. I find most women to be very selective about ingredients.

Thank you for the review of the restaurant - may just give it a whirl!