In the three years we were away from London much has changed (like the arrival of Boris bikes and hundreds of new cyclists on the roads) and much has stayed the same (like the seemingly interminable escalator closures at Bank). Favourite restaurants have shut, but new gems have sprung up. Some changes though have been, at most, skin-deep.
Chilango was a new name on Angel's main drag, attracting long queues of office workers on weekday lunchtimes whenever I passed it.
Not a fan of queues, I am nonetheless intrigued by their destinations and resolved to check the place out on a quieter day. 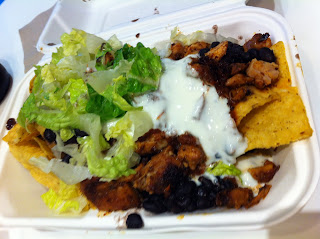 Inside, I was struck by deja vu.
Turns out that Chilango is a name-changed, redecorated Mucho Mas, which I reviewed 3 years ago. The same owners, the same Subway-style production line, the same free water and expensive Negro Modello, the same extra charge for guacamole (£1). The menu is broadly along the same lines, offering the choice of burritos, tacos, salad or totopos. I went for the latter as I liked the name :-)
The internet suggests totopos are a slightly different type of cornflour flatbread, but here the dish consisted of tortilla chips topped with black beans, lettuce, cheese, sour cream and chicken (£6.30). The online menu also mentions salsa, but I don't recall any and can't spot it on the photo either. It really wasn't great, coming across as a bland and soggy mess, despite the kick of the chilli. May be I should have gone for the burrito, but for that kind of money, I'd say it was a disappointing rip off.
Seems sometimes queues are wrong.

Posted by EdibleLondon at 7:02 pm

Yeah, Mucho Mas hired in some consultants/investors who helped them with rebranding. I still sometimes call them Mucho Mas! Find Eric on Twitter though...he is very responsive. @chilango_uk I think?

Thanks. I've yet to succumb to Twitter -- there just seems to be so much chaff out there and I am really not sure how to find the wheat.