Babies and culture mostly don't mix all that well, unless you count nursery rhymes. Theatres and concerts require a babysitter while serious books (I have discovered) can prove a bit too much for a sleep-deprived post-pregnancy brain. Open air stuff is generally ok though, as are art galleries.
So, we found ourselves at Tate Britain, checking out John Martin's Apocalypse exhibition. His scenes of judgement day and the end of the world were hugely popular with the spectacle-seeking Victorian public, and still look striking today. (If you go, The Evening Standard has a 2-for-1 offer on tickets until the end of the month.)
Our cultural appetites sated, it was time for lunch amidst much more light-hearted art.
The walls of the Tate's restaurant were covered in a whimsical mural by Rex Whistler nearly a century ago, then a 23-year-old art student. Called The Expedition in Pursuit of Rare Meats, it charts the progress of a group of seven people "through strange and wonderful lands encountering unicorns, truffle dogs and two giant gluttons guarding the entrance to a cave".
These days, the restaurant's focus is modern British (no unicorns). 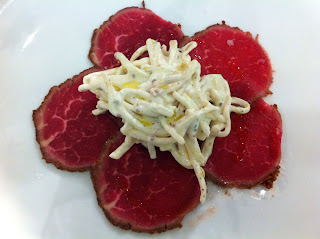 In the interests of research, I should have ordered the most unusual thing on the menu, the garden pea panna cotta with turnip, radish, pea shoots and mint oil (£6.50). Instead, I chickened out, and ordered what I actually wanted -- the beef carpaccio with truffle oil and celeriac remoulade (£7.95).
The beef was good quality and the truffle oil added an extra rich, velvety layer of taste. The remoulade -- thin strips of celeriac in a French tartar-like sauce -- was also very nice, but, to my taste buds, did not really go. The portion was also fairly small, even for a starter. I fleshed out the lunch with a couple of side dishes. For £3.25, the mixed leaf salad seemed overpriced - it was literally a handful of standard mixed leaves in a pleasant but unexciting dressing. 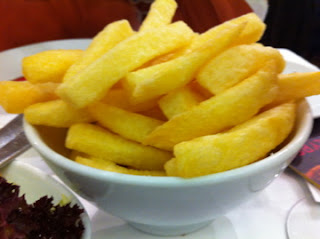 The same amount of money was much better spent on a large bowl of chunky chips which succeeded in walking the tricky tight rope between a crispy golden outside and a soft centre.
If you are hungry, the lunch menu is good value at £16.50 for two courses, and includes a selection of wines from the interesting list at £3.75 a glass (served 11.30am-3pm). They have also jumped on to the (now quite overcrowded) bandwagon of afternoon tea, complete with cute multi-teer cake stands. Accompanied kids eat free at lunchtime, and they have high chairs.
I wouldn't trek all the way out to Pimlico for the food, but it's a nice spot to digest the impressions of an exhibition -- this was not our first visit, and is unlikely to be the last.

Posted by EdibleLondon at 7:38 pm